Bernie Sanders is loved and followed by many supporters. He and Hillary are the top two Democratic front runners for the oval office. Bernie has a disdain for Mr. Trump that most Americans would love to show if given his platform. Bernie is a people person and know’s the hatred folks have for Trump so he uses that emotion among other things to get folks at his rallies moving. He doesn’t only focus on Trump, he also sheds light on income inequality, jobs, and tax laws that do not help the little people. Bernie’s other political affiliation was as an independent before deciding to run for president.

Bernie was born on September 8, 1941 in Brooklyn, NY. Fast forward his life many years he is now senator of the great state of Vermont. “The Green Mountain State” Vermont earned that nickname because half of the state is buried under a Forest. Not so much buried but covered in 75 percent green land, if that makes any sense. 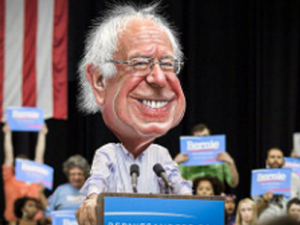 Bernie has strong belief’s in bringing back the middle class and simply being fair with the wealth of this country. It is a fact that the top 1 percent continue to have money funneled their way for personal interest. If you had a chance to check out the video that I shared, you will hear Bernie say “I will love to beat Donald Trump”.

He does not believe in anything Mr. Trump is saying to the american people. Mr. Sanders is all about redistribution of wealth bottom line. I personally like his approach it is so simple to understand.

If Bernie does get passed Secretary Hilary Clinton and leaps to trump it will be interesting for sure. Both men are from New York, Bernie from Brooklyn and Trump from Queens. Knowing how outspoken and charismatic these two men are should make for an interesting debate. One must not forget if I had to give the edge to anyone it would be Bernie he has way more political experience than Mr. Trump has had wives, cheap shot.

In case you didn’t hop over to Bernie’s Profile page let me refresh your memory about Mr. Sanders accomplishments that separates from Mr. Apprentice himself.

Buried in these bullet points is tons of experience, failures, victories and defeats. Clinton is Clinton no denying the power the name brings. Trump is an entrepreneur and entertainer, Bernie seems to be genuine and has been in trenches for years I mean look at him for gods sake.

If voting polls opened to today and our votes decided our next president this dude would probably be the one to choose. Numbers don’t lie and Bernie has a proven track record, he is for the people and when he is in office he will prove the world wrong and bring back the middle class.